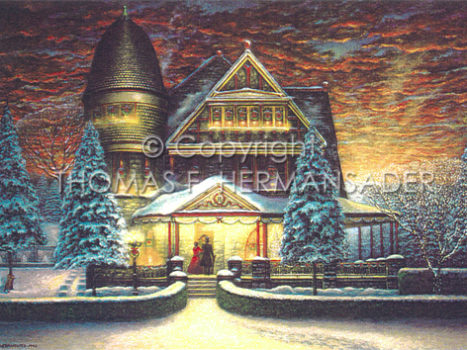 Hermansader’s Victorian Mansion
ORIGINAL NOT FOR SALE! For now, I want to keep the original. I've owned this home for 32 years and I am not ready to part with the original. Maybe it'll go to the future owner. PRINTS - The approximate print image size is 12-3/8 x 17-1/4". ARTIST'S PROOF PRINTS are $25.00 each - Very low inventory and near retirement. SIGNED AND NUMBERED PRINTS are $20.00 each; and, OPEN EDITION PRINTS (Unsigned/unnumbered) are $10.00-$15.00 each. 'Hermansader Victorian Mansion' porcelain ornaments are available.
I painted this oil painting in 1996. In 1996, a record snowstorm hit this area (32"), and the artist depicted it like it was. The property is on the National Register of Historic Places. Mr. John J. Snyder, Jr., local historian, visited the home in 1990 and said, "It is a fine regional example of late Victorian period architecture - and surely one of the best buildings of this specific period remaining in Columbia." The land on which it sits was purchased by Dr. John K. Lineaweaver in 1872 and sold to Francis A. Bennett in 1889. Mr. Bennett, the proprietor of a dry goods business located at 239-241 Locust Street, Columbia, Pennsylvania, built the home in 1890. In 1897, Frank S. Given bought it; in 1920, Jay Herr bought it; in 1923, Henry Westerman bought it; in 1953, James W. Staman, Jr. bought in 1986, Charles R. Stark bought it; and in 1989, this artist bought it. The building is a three-story, three-bay, stone, and wood-shingled Queen Anne house. Other architectural characteristics include a slate tower, a cross gable that is half-timbered with three double windows, a bay window on the second story, and a veranda with clustered posts and a pedimented entranceway. The mansion has 20 rooms and is very authentic. According to a history book, it was on the street known as "Millionaire's Row."
Buy a Print
Buy Emblem of Strength – New York City Now 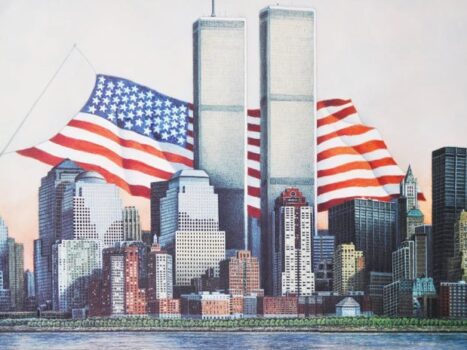 Emblem of Strength – New York City
OWN THE ORIGINAL - The original watercolor painting can be yours for $10,000.00!! PRINTS - The approximate print image size is 13-3/4" x 19-3/4". THE ARTIST'S PROOF EDITION IS RETIRED!! NUMBERED AND SIGNED PRINTS are $30.00 each - Inventory is very low, near retirement! OPEN EDITION PRINTS (unsigned/unnumbered) are $10.00-$15.00 each. 'Emblem of Strength - New York City' flat porcelains are available.
I started this painting one day after September 11, 2001. Alyssa, my daughter, was working only a few blocks away from the twin towers during the attack. She survived, but the time that it took until I heard from her was like eternity. I contacted the Salvation Army and offered to create a print and sell them in a fundraiser. They agreed, and I donated over $20,000.00 to the Salvation Army in Lancaster, PA, from the sale of this print. Every building from top to bottom is exact. The painting took over two hundred hours to research, photograph and paint. 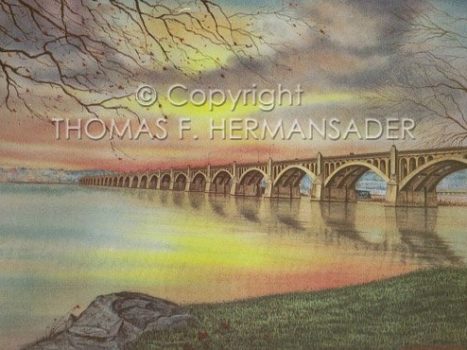 Veteran’s Memorial Bridge
ORIGINAL IS AVAILABLE - Purchase this original watercolor painting for $1,800.00.!! PRINTS - The print image size is 12-3/4" x 16-3/4". ARTIST'S PROOF PRINTS are $30.00 each. Inventory is very low and near retirement! SIGNED AND NUMBERED PRINTS are $20.00. Inventory is low and near retirement! OPEN EDITION PRINTS (unsigned/unnumbered) are $10.00-$15.00 each. 'Veteran's Memorial Bridge' porcelain Christmas ornaments are available.
The Columbia–Wrightsville Bridge, officially the Veterans Memorial Bridge, spans the Susquehanna River between Columbia and Wrightsville, Pennsylvania, Built originally as the Lancaster-York Intercounty Bridge, construction began in 1929, and the bridge opened September 30, 1930. On November 11, 1980, it was officially dedicated as Veterans Memorial Bridge, though it is still referenced locally as the Columbia–Wrightsville Bridge.
Buy a Print
Buy Snowman and Friends Now 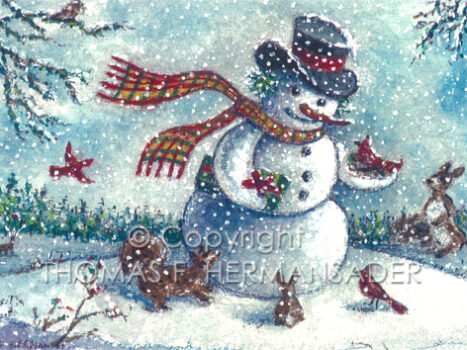 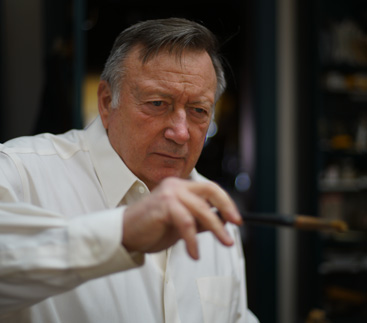 A native of Allentown, PA, Tom F. Hermansader has been painting the area’s most noted landmarks on canvas and paper for more than four decades. His realistic style captures the essence of “hometown” and has forever preserved both the old and the new of Lancaster City, Lancaster County, and more than a hundred other locations in and around Pennsylvania.

Learn more about Tom’s journey as an artist, from his artistic heritage and early work to his first successful painting, gallery showings, awards, and more.

View hundreds of images representing a lifetime of Tom's artwork... covered bridges, churches, schools, landscapes, historic buildings, florals, and more. Our title list is sure to thrill even the most discerning collector. 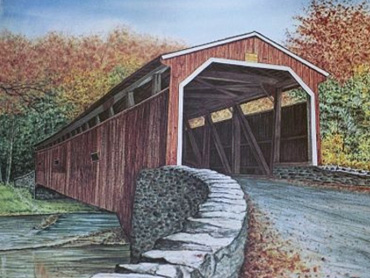 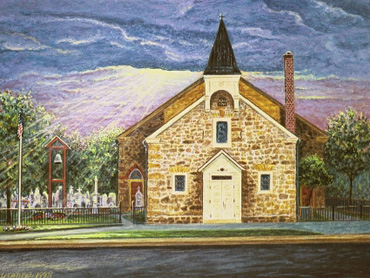 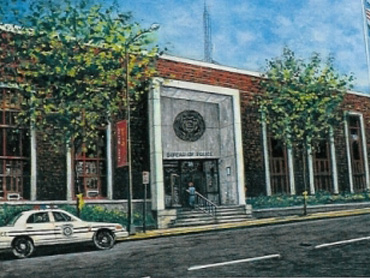 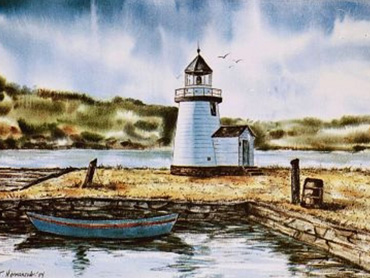 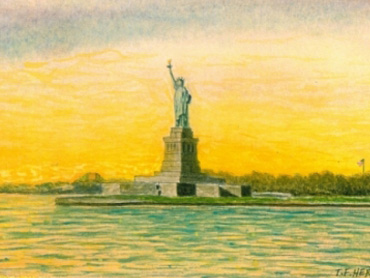 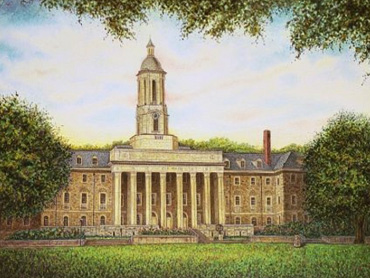