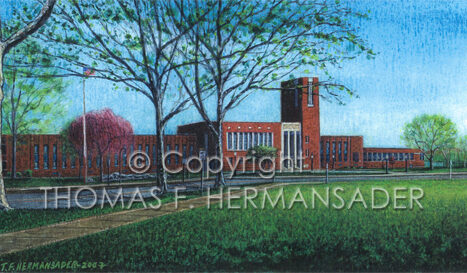 Watercolor painted on paper. The original is listed at $600.00

J. P. McCaskey High School is a public high school located in Lancaster, Pennsylvania, United States. Located on the east side of Lancaster, it is named after John Piersol McCaskey, a local educator. The McCaskey campus consists of two buildings: J. P. McCaskey, which is usually referred to either as "JPM" or simply "JP"; and McCaskey East, which is referred to as "East". Also on the McCaskey campus are a number of playing fields (for soccer, baseball, softball, and field hockey), tennis courts, and a stadium. Nearby are Wickersham Elementary School and Lincoln Middle School.

Watercolor painted on paper. The original painting is listed at $1,200.00.

Friday Night Lights in Manheim, PA. This stadium, the Elden Rettew Stadium, has a 200 person capacity. The painting was done as a fund raiser for B.R.A.K.E.S. 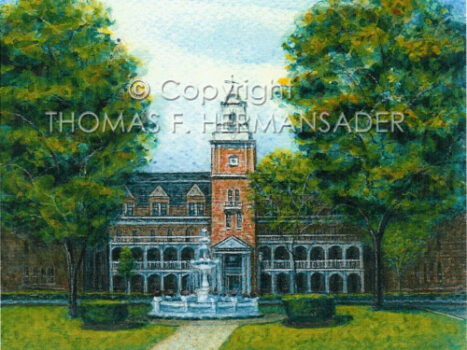 Shippensburg University was founded as the Cumberland Valley State Normal School in 1871 and received official recognition and approval by the commonwealth on February 21, 1873. Two months later, on April 15, we admitted our first class of 217 students from south-central Pennsylvania. Seeing greater potential for the school, the Commonwealth of Pennsylvania purchased it in 1917. Over the next few decades, great strides were made. 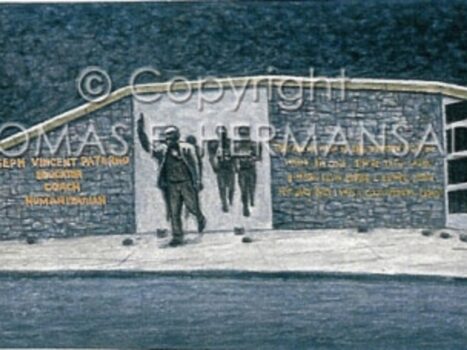 The watercolor original painting is listed at $750.00.

The statue was commissioned by friends of Paterno and his wife Sue in recognition of his contributions to the university and was unveiled on November 2, 2001. It was sculpted by Angelo Di Maria of Reading, Pennsylvania and took 2–3 months to complete.[1][2]

The statue is 7 feet (2.1 m) high and weighs 900 pounds (410 kg).[2] It was accompanied by a stone wall in three sections. The left section of the wall read, "Joseph Vincent Paterno: Educator, Coach, Humanitarian". The center section showed a bas-relief of players running behind Paterno. On the right was a quote from Paterno, "They ask me what I'd like written about me when I'm gone. I hope they write I made Penn State a better place, not just that I was a good football coach." The right section also featured plaques with lists of games Paterno had coached at Penn State from 1966 to 2011.[1][3] 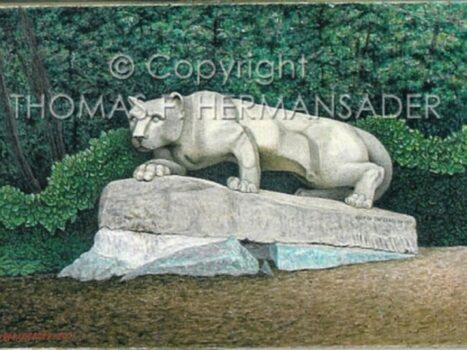 The Nittany Lion Shrine at Pennsylvania State University was dedicated on October 24, 1942 during Homecoming. Animalier Heinz Warneke and stonecutter Joseph Garatti created it from a 13-ton block of Indiana Limestone. The shrine was chosen from six models submitted by Warneke.

The shrine is a gift of the class of 1940 and rests in a natural setting of trees near Recreation Building.[1]

In 2013 the shrine was renovated to improve the lighting, add a sidewalk, and add large decorative stones. The improvement was the gift by the Penn State's class of 2012.[2] The Nittany Lion statue is located on Penn State's campus located in State College, Pennsylvania. 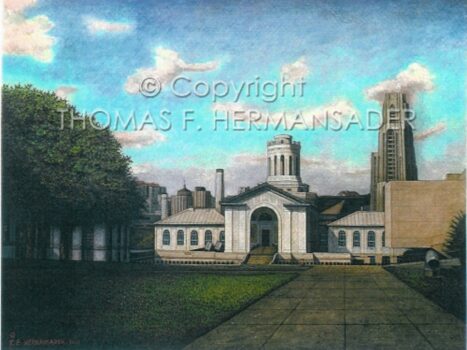 Bemesderfer Executive Center or the Old Library, is an 1894 Romanesque Revival building on the campus of Millersville University. Built to replace the over-crowded library in Old Main, Bemesderfer Executive served many roles over the years and now serves as the Office of the President and Provost. With the opening of Ganser Hall in 1967, the "old" library was used as the temporary union building (the RAT) before being renovated and rededicated as Biemesderfer Executive Center. It was named for President D. Luke Biemesderfer (1943-1965) and his wife, Elva, both 1917 graduates of the normal school. It houses the offices of the top administration on campus as well as the H. Edgar Sherts Board Room, named for an 1896 graduate and prominent member of the Board of Trustees (1910-1936).[1]

The Cathedral of Learning is a 42 story skyscraper that serves as the centerpiece of the University of Pittsburgh's (Pitt) main campus in the Oakland neighborhood of Pittsburgh, Pennsylvania, United States. Standing at 535 feet (163 m),[6] the 42-story Late Gothic Revival Cathedral is the tallest educational building in the Western hemisphere and the second-tallest university building (fourth-tallest educationally-purposed building) in the world, after the main building of Moscow State University.[7] It is also the second-tallest gothic-styled building in the world.[8] The Cathedral of Learning was commissioned in 1921 and ground was broken in 1926 under general contractor Stone & Webster.[9] The first class was held in the building in 1931 and its exterior finished in October 1934,[10] prior to its formal dedication in June 1937. It is a Pittsburgh landmark[2][11] listed in the National Register of Historic Places.[12][1 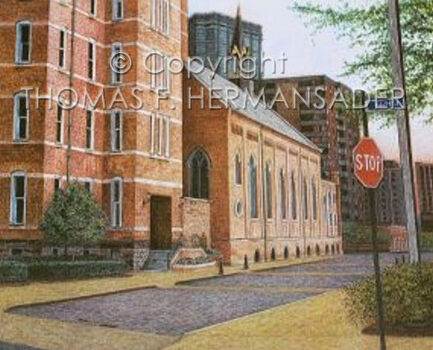 Duquesne University of the Holy Spirit (/duːˈkeɪn/ or /djuːˈkeɪn/) (Duquesne University or Duquesne) is a private Catholic research university in Pittsburgh, Pennsylvania,. Founded by members of the Congregation of the Holy Spirit, Duquesne first opened its doors as the Pittsburgh Catholic College of the Holy Ghost in October 1878 with an enrollment of 40 students and a faculty of six. In 1911, the college became the first Catholic university-level institution in Pennsylvania. It is the only Spiritan institution of higher education in the world.[citation needed] It is named for an 18th-century governor of New France, Michel-Ange Duquesne de Menneville. 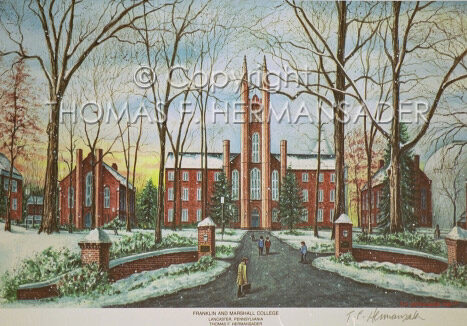 Watercolor painted on archival paper in 1987. The original painting is priced at $6.000. It has been sold.

Franklin & Marshall College is one of the oldest institutions of higher learning in the United States. Our roots go back to Franklin College, founded in 1787 with a generous financial contribution from Benjamin Franklin. 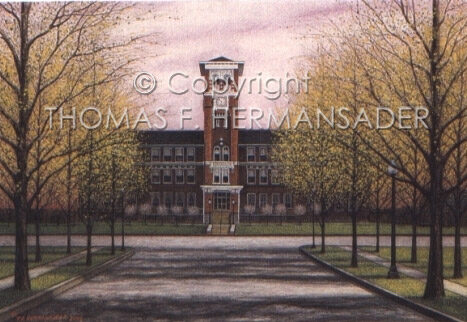 Thaddeus Stevens College of Technology is a premier residential, two-year, accredited technical college that educates Pennsylvania’s economically and socially disadvantaged as well as other qualified students for skilled employment in a diverse, ever-changing workforce and for full effective participation as citizens. Thaddeus Stevens College has expanded from its original student body of 15 to over 1,300 students who are enrolled in 24 high-skill, high-wage technical programs. Over 90 percent of the College’s graduates have remained in the Commonwealth since its founding in 1905. Thaddeus Stevens College of Technology is Pennsylvania’s only state-owned, two-year college of technology. 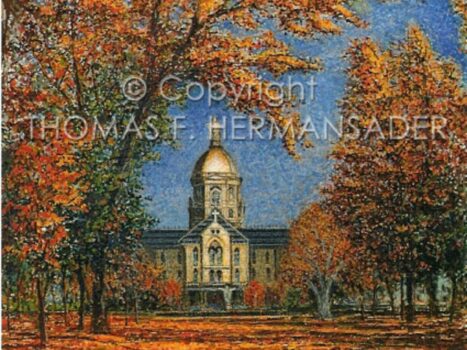 University of Notre Dame's Main Administration Building (known as the Main Building or the "Golden Dome") houses various administrative offices, including the Office of the President.[2] Atop of the building stands the Golden Dome, the most recognizable landmark of the university.[3][4] Three buildings were built at the site; the first was built in 1843 and replaced with a larger one in 1865, which burned down in 1879, after which the third and current building was erected. The building hosts the administrative offices of the university, as well as classrooms, art collections, and exhibition spaces. The building is listed on the National Register of Historic Places.[5]